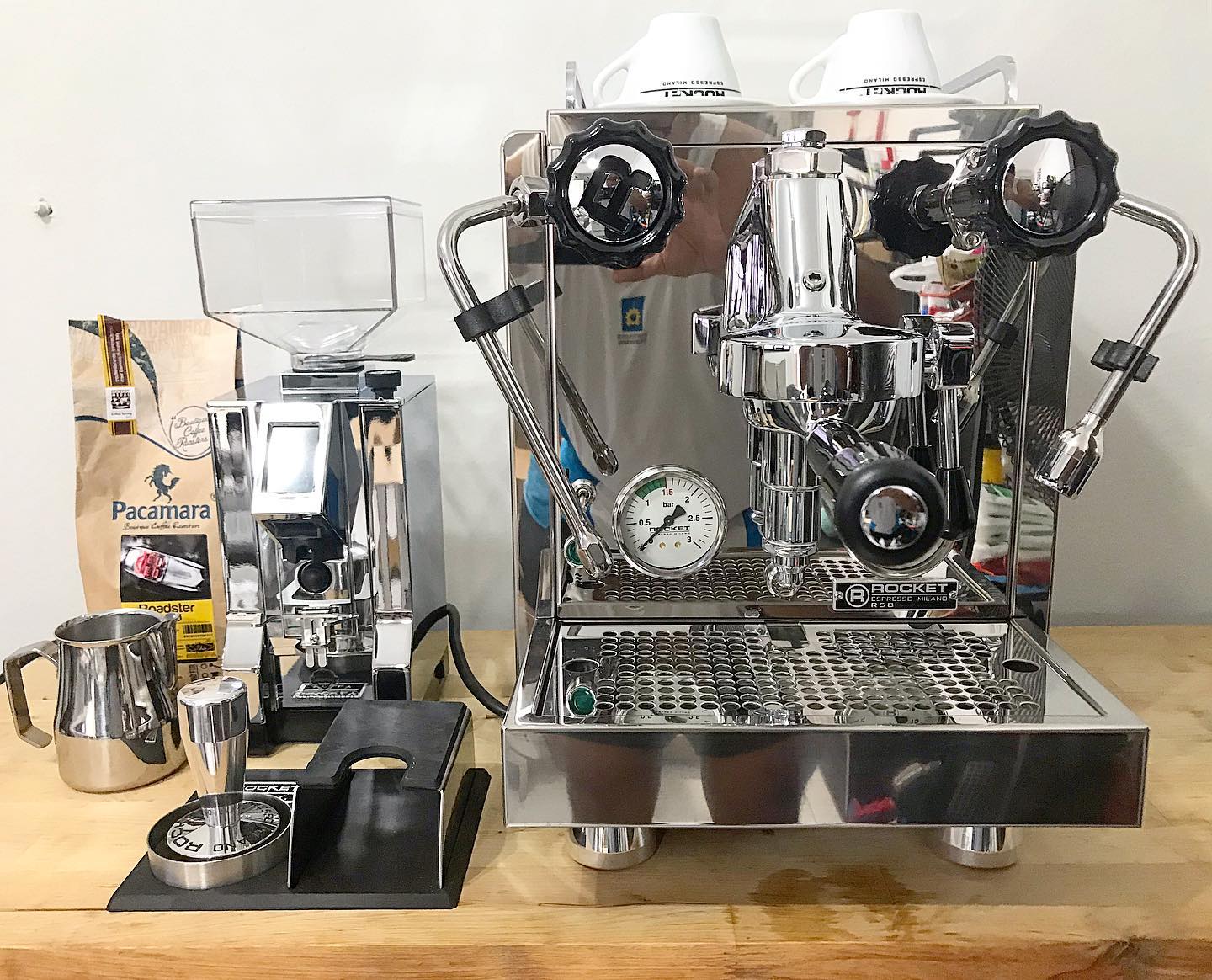 That leads to one asking: Is that really necessary?

Our test proves: Yes, it is!

Well, what a weight-lifting act this was to get up on my counter!

Stubborn 29 kg has to be lifted out of the cardboard box, designed and secured as usual, before the chrome sun rises in the kitchen at home.

But then she stands there and does not want to give way anymore: steel, timelessly elegant piece of espresso technology, washed with pretty much all equipment water and robustly processed, typical of Rocket.

Initially, in conversation as “Rivoluzione”, the R58 neither denies externally nor in terms of weight the close relationship to Rockets, a professional series that has only been available since mid-2011.

To celebrate the day, the small but fine manufacturer from the Milanese district has added, not only an actually usable tamper made of aluminum and the stable stainless steel rail as standard but also two portafilters. Along with, exemplary operating instructions and an introduction by DVD tutorial. Bravo!

The R58 looks almost a bit like an insect thanks to the laterally extending, generously dimensioned, and completely free-moving no-burn lances, reminiscent of feelers.

Since the milk froth should come to a relaxed show. Two easy-to-read, high-quality pressure gauges are installed on the left and right above the drip tray.

The best thing, however: the one installed in almost all PID competitors.

Instead of this, the R58-Barista controls all relevant parameters (boiler temperatures, operating status of the steam boiler, operating mode tank / permanent water) via a small metal box with a display panel, which can be docked to the side of the machine via a serial port if required. An obvious and sensational idea, which in terms of execution can still be improved, does not appear to be fully conceived.

The unit itself makes a valuable impression.

The user may have a problem with the connection between the cable and the rocket or control unit, which is certainly heavily used in everyday life. There is also no kind of holder or stand to park them comfortably during operation, without losing sight of the brewing temperature.

Ever thought about Bluetooth, gentlemen? At least a modern USB port should have been there. And while we’re at modern, why only one of the two rotary knobs was approved with an “R” will probably remain the secret of the product designers forever.

From the Outside In

On the other hand, pure consequence rules. Despite the acute lack of space, the developers of the R58 have given it pretty much everything good and high-quality.

The rotary pump, which can be adjusted from the outside with a brass screw. It is quiet and relentlessly pulls the water out of the pipe. The water tank can hold 2.6 liters which of course is somewhat scarce.

The fill levels are monitored electronically, and both copper kettles are equipped with professional Armaflex insulation, which should be good for both the climate balance and the household budget. The operating pressures of the two with 0.58 (coffee) and 1.

Only the actual conditions in the boiler are shown on the control unit’s display – no “calculated” brewing temperature at the group, which is always dependent on external factors such as the ambient temperature.

Two 1400 Watt heating elements ensure stable conditions, an ingenious circuit prevents both of them from firing off simultaneously and limits the simultaneous power consumption to 1550 Watt.

The Rocket r58 in Action

The pump purrs until after a short while both boilers are filled with water. This is only just after seven and a half minutes. The factory set 105°C brewing boiler temperature has been reached.

Another five minutes later, the machine, including the empty cover, is ready to use, and after almost exactly a quarter of an hour from the cold start, we open the steam valve for a few seconds to prevent the formation of a vacuum (and thus the potential carryover of milk into the kettle).

With these capabilities, the user can hardly resist a happy grin. For a machine with an E61 brew group that weighs more than four kilos, this is a record-breaking fix.

The first two or three shots are for the bucket, as always, then everything fits as far.

It takes a while for a racing car like the R58 to get the good shots – but rarely before (especially not with a household machine) was it so much fun to get there.

Dialing in temperature and pressure is child’s play; the clearly readable display is absolutely intuitive to use. After we have circled the optimum a couple of times, we ignite the “Gran Miscela” from La Tazza d’oro, which is still somewhat flat at approximately 92°C. Then finally 10 °C boiler temperature glows on the display which according to the table provided by Rocket, thankfully corresponds exactly to 94.6°C brewing temperature – and “boom”!

Then the hut burns. Chilled to ice-cold, the espresso clipper would say.

Finally, just for fun, we donate an extra gram of caffè, just for the sake of fatness. We are in caffeine heaven. If you indulge in chocolate nuances, and can literally smell the Sardinian sea.

The system is also unable to overturn multiple purchases in direct succession.

The powerful heater quickly and quickly ironed out the short sumps created despite the lack of preheating. Like that used by Vibiemme in the Domobar Super.

The long lance makes every angle possible, and the 1.7-liter kettle provides especially if you jazz it up a bit – more than enough bone-dry wants to do a good ballet with the factory-installed 2-hole nozzle.

It should almost be towards an unintended explosion for most home users with a massive 4-hole nozzle of the R series (unfortunately not included).

Due to the precisely responsive professional spring valves, the steam and fine-pored latte art foam’s sensitive metering is no problem as a result.

In conclusion, pulling all the shots with this machine is as easy as it is entertaining.

Their complete equipment as well as the temperature control is as easy to use as it is surprisingly stable even without an additional heat exchanger.

This makes the new Rocket double boiler Macchina an absolute must-have item for every ambitious home barista. It also predestines itself as a welcome tool for small roasters.

With such qualities in the luggage, the Rocket r58 should properly blow through the highly competitive dual boiler market. In the end, the real highlight is that the concentrated technology qua smart handheld solution respects the classic design.

If Rocket still has insight and in the medium term a few additional Euros for a permanently higher-quality USB interface (or a Bluetooth solution along with an iPhone app!), but the competition can dress up warmly.

There is no doubt in my mind, that this amazing espresso machine, is one of those “once in a lifetime” purchases, that you know are expensive, but you also feel in your bones that you get an amazing product that you never regret investing in. 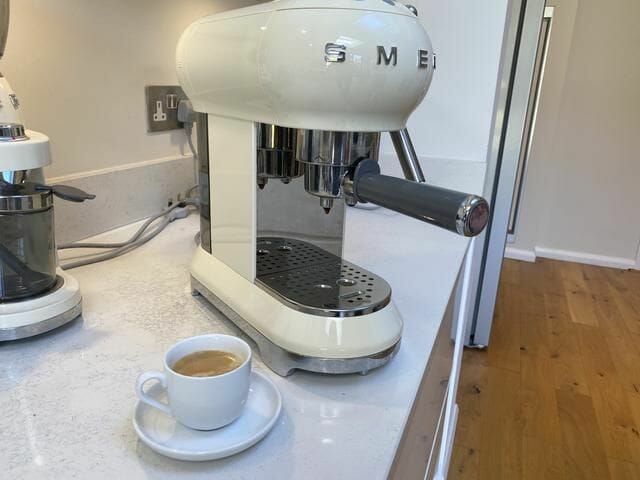 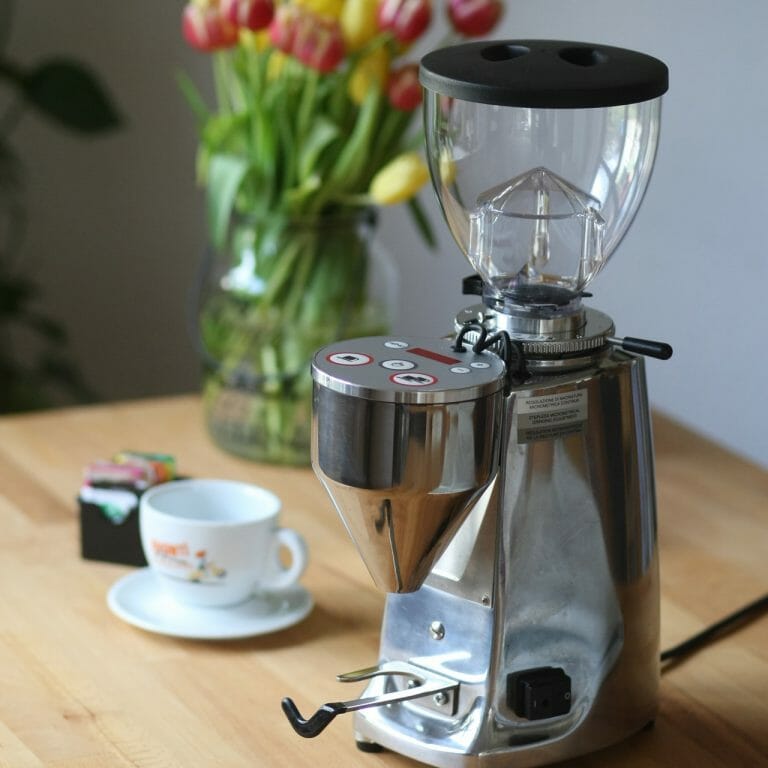 For 71 years, Luigi Mazzer’s company from Scorzè, which is located near Bella Venezia, has only been building coffee grinders. And they do a great job.   Starting with their models, the customer now looks at an extensive product portfolio. This article is specifically about the Mazzer Mini Review; both A and B. Grinder Selection The… 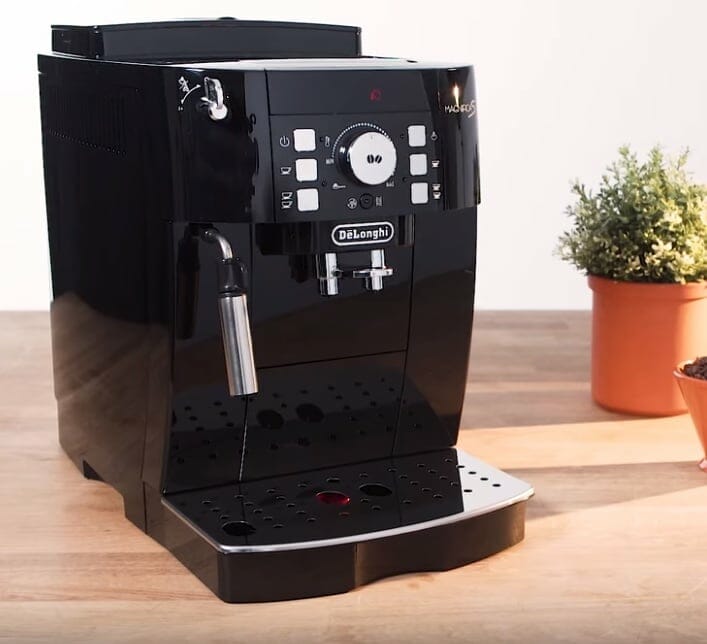 Best Espresso Machine With Milk Frother Coffee plays a major role in most people’s daily lives, and it is only a few, who will be able to get through a whole day without drinking the magic elixir of life, coffee. This also means that they place greater and greater demands on the quality of coffee,… 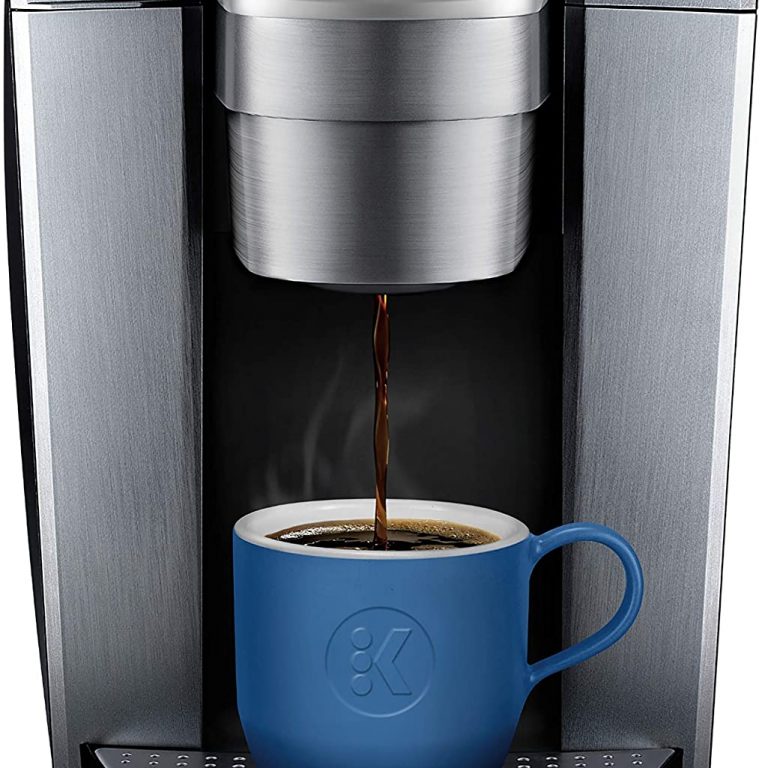 Getting a coffee maker with a removable water reservoir is one of the most essential features to look for. Understandably, the process to choose can be daunting. You can’t seem to commit to which brand you want to choose from. We are going to go in-depth into the various coffee makers accompanied by a removable… 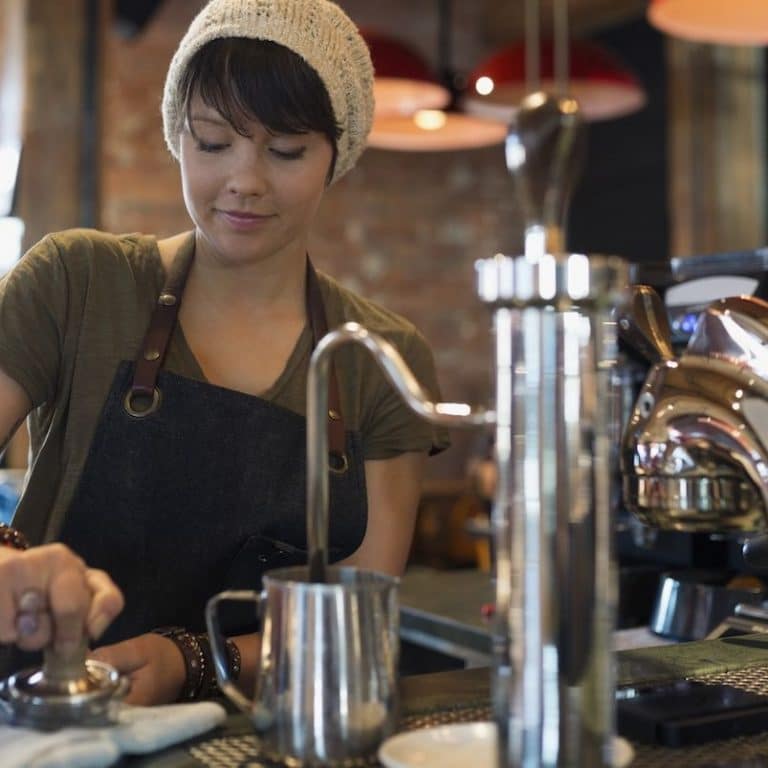 In today’s article, I`m bringing you, the three must-have espresso tools for any barista, so, whether you’re a home or cafe barista, these always come in handy. Let’s start out with the dosing funnel. The dosing funnel is just a super, simple piece of equipment that saves you time cleaning up and saves you money… 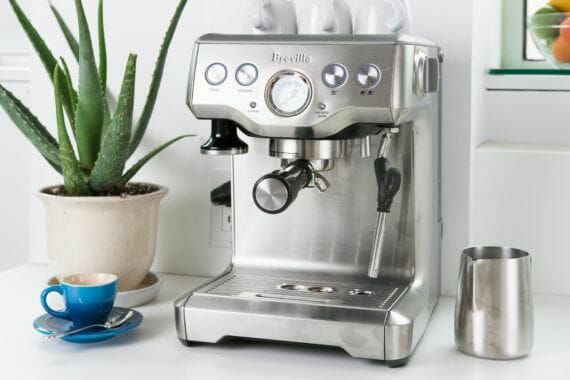 There are a number of things I love. One of the things that many of us cherish and love is our coffee. We cannot go a day without this vital drink, as it provides us with the energy we need to cope with everyday hardships. Coffee is important for energy, but it is also a…