Roasting coffee - art and science in one 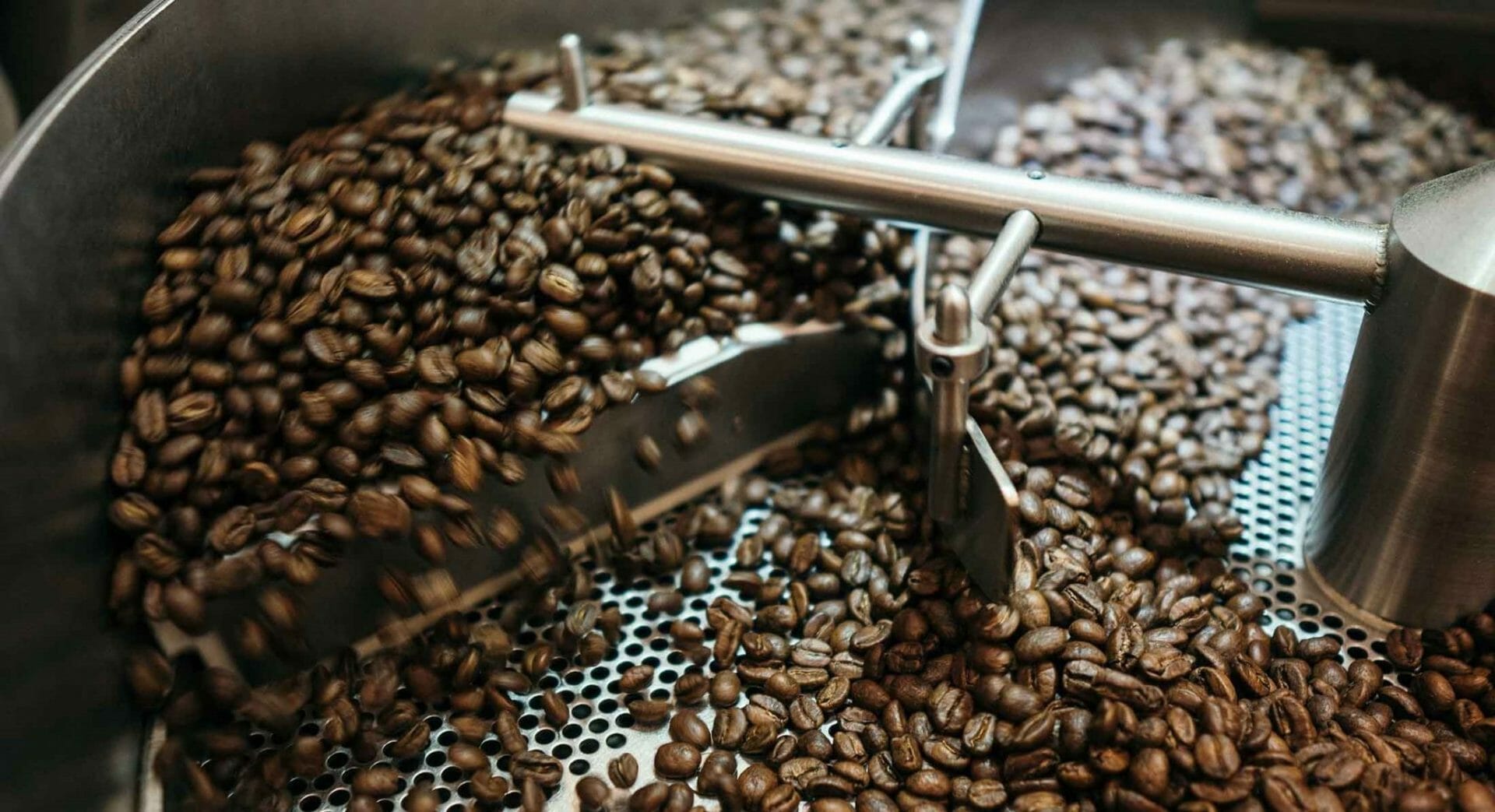 Roasting coffee – art and science in one – In this article, I will go over the coffee roasting process. The art of roasting, how to actually roast coffee, and much more.

When coffee ripens and is harvested, it is picked from the bush as small red cherry fruit. In further processing, the red skin and the pulp are removed. What remains is the coffee bean protected by the silver and parchment skin. After peeling, the coffee is dried. The exact procedure depends on the respective preparation process.

As soon as the bean has dried sufficiently – sufficient means that it has lost about 70 per cent moisture – the coffee is ready for storage and shipping. In this state, it then waits to be processed, i.e. roasted. Dried coffee can be stored for a long time without losing quality.

The flavours and acids are so to speak enclosed in the bean and are only released when roasting. That is why raw coffee that has been stored for a long time still tastes fresh after roasting. If you didn’t roast it, the result would be a very bitter, extremely acidic drink that would be almost inedible. Only roasting gives it its taste.

The art of roasting coffee

It often takes years for a roaster to learn to “read” the beans, so to speak, and to timely match the right moment at which they have reached the right degree of roasting. It only takes a few seconds to ruin a perfectly roasted coffee.

The art of roasting coffee recognises the right roasting time and the ideal colour for each coffee. At a certain point in time, the roasted aromas overlay the natural coffee aromas. With darker roasts, such as espresso, this may well be desirable. The darker the roast, the further the coffee taste deviates from the bean’s original aroma profile, however, in light and medium roasts, the nuances dominated by the country of origin and the variety. 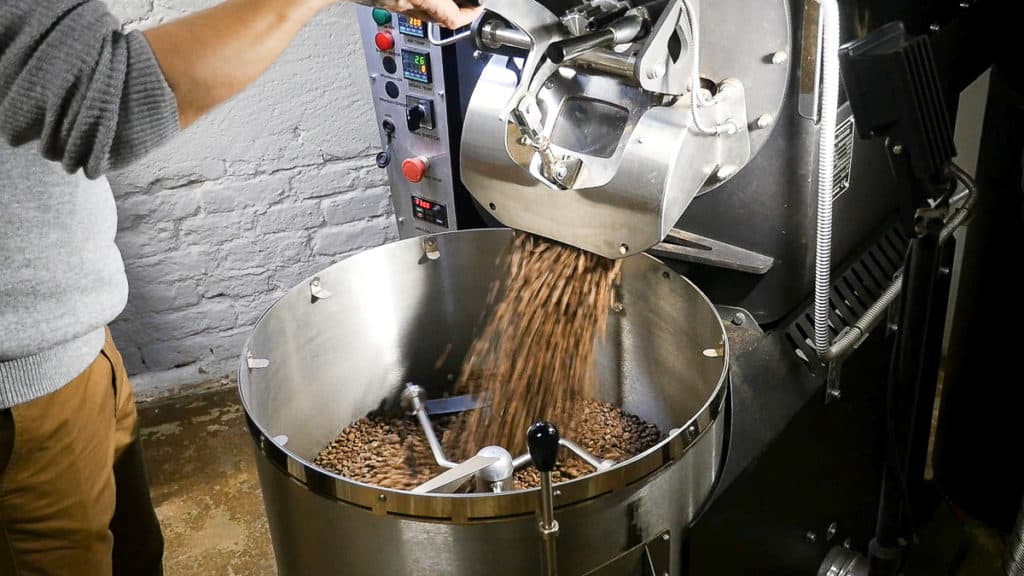 How does the roaster know that the coffee is good?

A good roaster knows his coffee. Because only if he knows the aroma profile will he know how to sharpen the so-called roasted profile of the beans to achieve the desired taste result. It depends on how long and at what temperatures the coffee is roasted because the roasting profile develops following a roasting curve.

With the increasing temperature in the roasting drum, body and sweetness develop first with coffee. The bean begins to turn yellow, then caramel to brown. The roasting curve shows a steep increase from the turning point to the brown colour. As soon as the beans are roasted brown, the curve is a little flatter. Then it won’t be long before the first crack. Coffee roasters call the crackling noise of the individual coffee beans crack, i.e. the time when the moisture in the coffee beans escapes suddenly. With this first crack, then the formation of the acid in the coffee begins. The roasting curve can run out one to two minutes after this crack by shutting down the burner or switching it off. The coffee is now ready to be ground and drunk.

For particularly dark roasts, the curve continues with a slight increase. Because the roasting profile can be sharpened a little more with the second crack. From the second crack onwards, the aromas that later make up the coffee after drinking are defined.

The course of such roasting curves or the creation of such roasting profiles basically corresponds to a cosine curve. This can vary depending on the type of coffee, the desired taste result and armour. Once a roaster has worked out a roasting profile that matches the bean, he can either manually note this temperature and time ratio and use it again for the next roasting. Or he uses computer-controlled systems that automatically record, save and, if necessary, call up and use the roasting curves’ courses. Constant coffee quality can be guaranteed by recording and re-using saved, tried and tested roasting profiles.

“Pergamino”, as the Colombians call it, is the dried coffee bean protected by the silver and parchment skin. After peeling we speak of green coffee, which can be roasted.

Roasting coffee as a biochemical process

From a biochemical point of view, green coffee undergoes some drastic changes when roasting. When roasting, the remaining moisture is finally released from the beans.

This will make the bean dry, causing it to expand. During the roasting process, some of the natural sugar molecules inside the bean are converted into CO2, while others caramelize due to heat.

This caramelization – or the conversion of amino acids and sugars into melanoidins – called the Maillard reaction in chemistry, is one reason why the almost 800 complex taste nuances develop in coffee.

Simultaneously, as the biochemical processes inside the coffee bean, the coffee also undergoes an external change when it is roasted.

The Maillard reaction is also responsible for this. The green bean becomes increasingly darker and takes on a brown colour. That is why roasters also speak of non-enzymatic browning. As soon as the coffee bean has reached the right shade and degree of roasting, it is immediately cooled to prevent the process from continuing.

About the way, you don’t keep food in the hot pan to prevent it from cooking again.

The roasted beans already exude the typical fragrance known as coffee smell. At the end of roasting, they are up to 20 per cent lighter than when raw, but one and a half times to twice the size of green beans.

As soon as the roasting process is finished, roasted coffee begins to “outgas”. After a week or two, the coffee “calms down” and unfolds its full taste.

After this time, he already loses part of his aromas and flavours – initially only slowly, but the longer, the faster.

It is all the more important that the roasted coffee is stored airtight and dry. And ideally, it is used up as soon as possible. 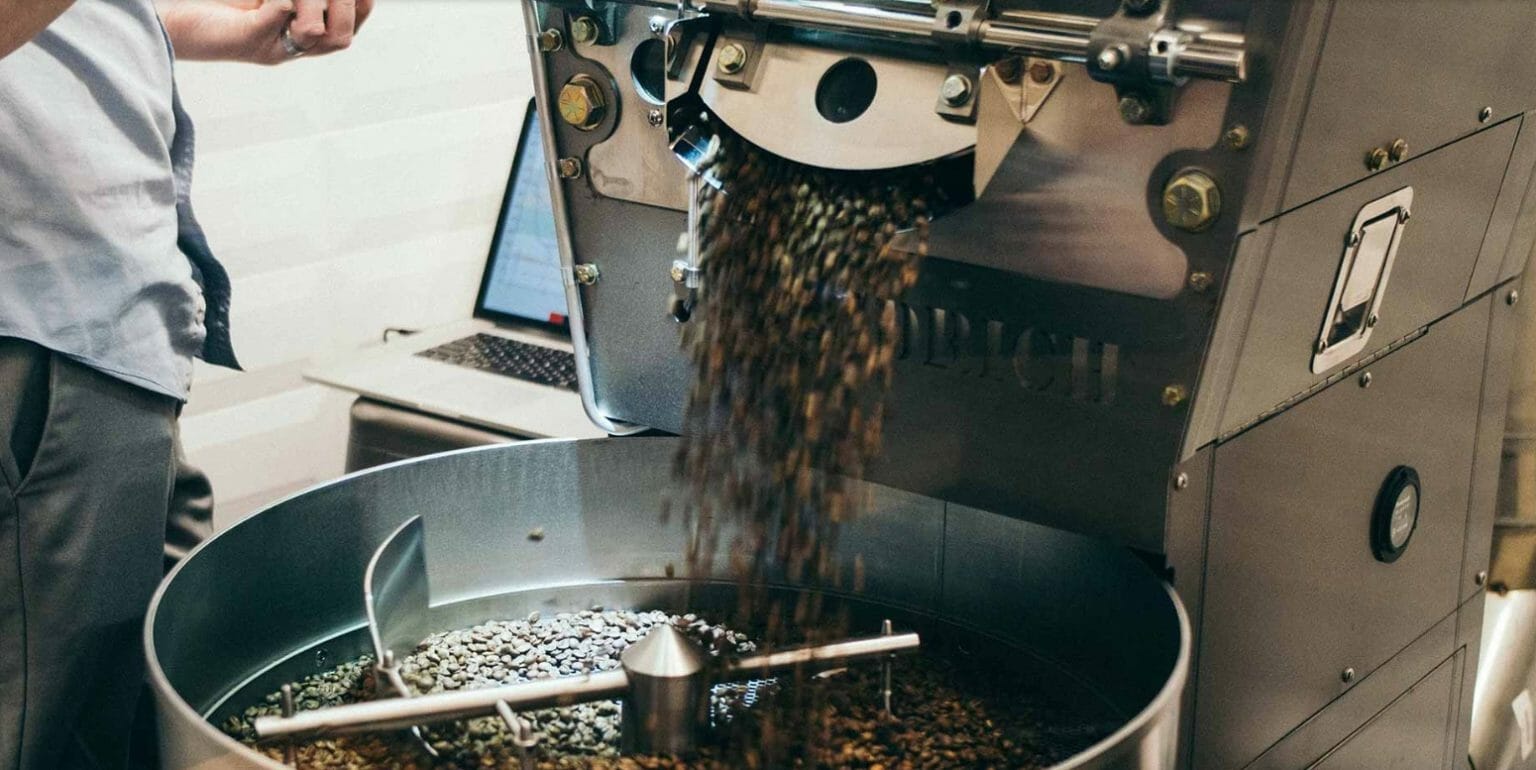 How is coffee roasted?

According to legend, the discovery of coffee roasting was due to an accident. The beans no longer land directly in the fire – neither accidentally nor intentionally.

Roasted pans have been known since the 15th century, roughly as they are still used today to roast chestnuts.

However, the demand for coffee today would probably no longer be met even with roasted pans.

Fortunately, methods have been developed over the centuries to roast large amounts of coffee evenly and significantly more efficiently. There are essentially two roasting processes.

The drum roasting. This process is also called long-term roasting.

The two processes, but above all the shape of the roasting machines, influence the thermodynamics during roasting in different ways.

That is why two different tasting coffees can be made from the same green coffee, depending on the method used to roast it.

How does drum roasting work?

Drum roasting is the older of the two roasting processes. With this machine, the coffee beans are placed in a preheated drum or cylindrical chamber.

This drum is then rotated slowly over an external heat source (burner).

The drum roasting process uses temperatures between 180 ° C and 240 ° C. If the first crack starts after about 9 minutes, it will take another 3 minutes until the light roast is ready.

Then the coffee from the drum is poured into a cooling sieve.

This is permanently installed and in front of the drum of the roasting machine. It helps to seal the aromas in the roasted bean, so to speak.

The second crack is usually also awaited for darker roasts.

Then they slide into the cooling screen, where they are cooled using the air cooling process. 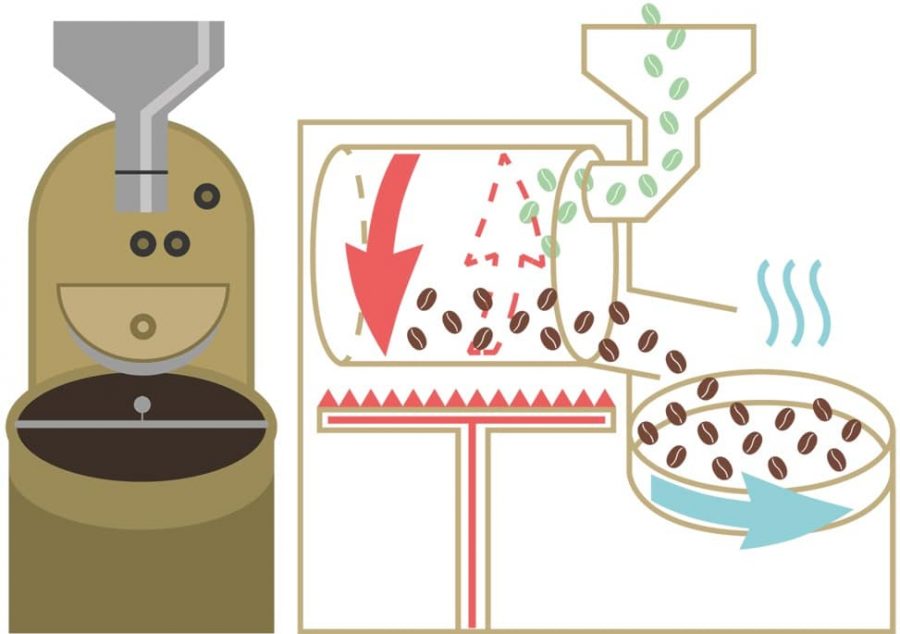 How does hot air roasting work?

Basically, the hot air process is a kind of drum roasting; however, on a much larger scale.

Here, too, the green coffee is placed in a kind of cylinder. In contrast to traditional drum roasting, the coffee is preheated here and reaches the roasting cylinder in quantities of up to half a ton.

The roast drum consists of two sections: the roasting area and the cooling area.

Because the coffee beans go through the entire process within a rotating, air and water-permeable drum, one also speaks of roasting lines.

The beans first enter the roasting section through an inlet.

One speaks of convective heat transfer. Within two to four minutes, the drum’s rotating motion transports the beans into the cooling section, where they are quasi-chilled with cold water or steam.

This type of cooling is also known as quenching.

To ensure that the beans do not remain damp before they are packed, they are finally put into a cooling sieve despite this cooling method.

They are blown dry with cold air. The actual roasting process for hot air roasting only takes about 2-3 minutes.

Which roasting process is better?

Hot air roasting is primarily designed for large quantities of coffee because it is the more efficient method.

The entire roasting process is significantly faster due to the high temperatures, as is cooling with water.

However, this roasting process is not very gentle on the coffee bean and does not provide the best results.

Due to the high heat, the beans are brown on the outside, but still, light on the inside. Some even burn.

The use of water can also destroy the roasted coffee. If the beans absorb too much moisture during quenching, this can evaporate later during storage. As a result, even more, flavours are lost.

However, the radical drop in temperature during cooling often causes the beans to burst (so-called breakage), which expands under the influence of the cold.

The essential oils can evaporate. As a result, the coffee tastes flat and often not balanced.

Overall, coffee that has been processed using the drum roasting process is considered aromatic and mild and therefore gentle on the stomach.

“Classic drum roasting is gentler on coffee. Less heat is generated, and the process takes longer.

This gives the heat enough time to penetrate the inside of the coffee bean and not only roast it externally, but evenly and consistently. Because the beans do not heat up so much with this roasting process, no drastic means have to be used for cooling. It is sufficient to cool the beans with room air.

This prevents the beans from breaking open, and the aromas are retained. Coffee from the drum roasting process has a more balanced taste”. 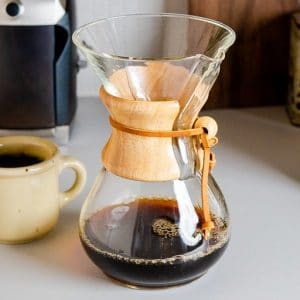 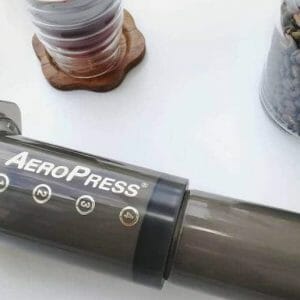 How To Get Better Coffee Out Of Aeropress? 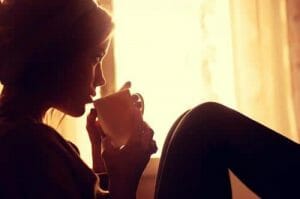 How do the daily cup of coffee affect your health? 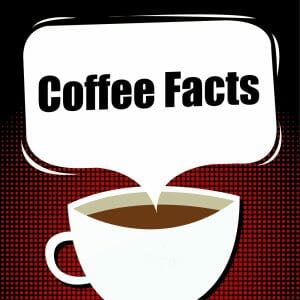 20 interesting facts about coffee Sometimes the more often we see and use something, the less we really know it.  Our daily dose of energy

As an Amazon Associate, I earn from qualifying purchases. Using our referral links may earn us a small commission at no extra charge to you. This helps us keep the site live and creating helpful content for you.

Thank you for your support.