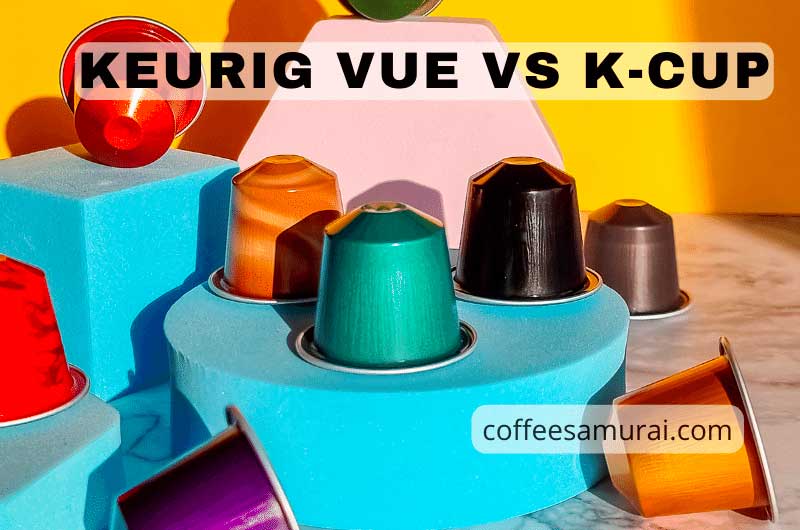 Ever since Keurig Vue was introduced back in 2012, the debate of Keurig Vue vs K Cup has been going on.

People have all sorts of questions like why it was introduced, where it is now, and most importantly, which one of the two is better.

Even a decade later, this topic hasn’t been laid down to rest because Vue was quite a popular product.

So, this article will hopefully give you some much-needed closure and answer all the questions you may have.

First, let’s talk about Keurig Vue. As mentioned, Keurig brought this model into the market in 2012. It had cool new features that set it apart from the previous machines.

Here’s a breakdown of what Vue has to offer.

The best thing about a Keurig Vue is the customization. You can control the strength, temperature, and size of your beverage, every single time.

The Vue cups are larger than the regular K cups so the resulting coffee was stronger.

Back then, travel-friendly single-serve coffee machines were not a thing. So, the fact that the new Keurig Vue could accommodate a mug up to 18 ounces was a game-changer.

There is another new feature of using two pods in one machine. One pod is the regular Vue coffee pod. Another is a dry milk pod that allowed you to customize your drinks.

You get the option to make cappuccino, latte, or mocha, all in one machine.

The Keurig Vue V600 Brewing System gives you total control to customize your cup. Brew stronger, bigger, hotter and with more choices than ever before.

The Keurig Vue machines use Vue pods instead of K cups. The Vue pods are better in almost all aspects.

Vue pods use plastic that is recyclable which makes them better for the environment.

Secondly, Keurig Vue pods are bigger in size vs K cups. While K cups can only brew coffee for a standard 12oz cup, Vue can do that for an 18oz cup. This meant that you could potentially brew stronger coffee with a Vue pod.

Lastly, the Vue pods design compared to the new Vue machines leads to fewer cracks and breaks in pods.

With all the new features and fancy inclusions, the price of Keurig Vue compared to machines that used K cups is higher.

The Vue pods themselves cost extra since they are larger. Then, if you wanted the dry milk pods, you have to pay extra.

Overall, it was an expensive product with all its bells and whistles.

K cups have been around forever so even when Vue was introduced, K cups were in popular demand. This meant that there were many flavors of K cups but not as many in the new Vue pods.

So, in the battle of variety of the Keurig Vue vs K cups, the K cups took the win.

Despite the innovative features and new technologies in the Keurig Vue, it wasn’t a great success. So, after a few years, precisely, in 2014, the Keurig Vue was discontinued.

Now, Vue pods are even harder to come by, and the machine is only available on random websites, not officially sold.

K-cups, as opposed to Vue pods, are the most popular single-serve pods available worldwide. There are many options to choose from and you can use them in nearly all Keurig single-serve machines as well as other single-serve coffee makers.

Let’s get into its details.

If you’ve ever looked into brewing coffee at home, you must have heard about K-cups. Chances are, you might have even used them somewhere. This is a testament to how popular they are.

They are available everywhere – online, in stores, probably in your local coffee shops as well. The point is that they are easily accessible almost anywhere.

The fact that K cups have been around for so long means that there is a wide variety of options available. There are K cups for not only coffee but also tea, hot chocolate, etc.

You can choose from a range of brands from Peet’s, Maxwell’s, Dunkin’s, Green Mountain’s, and many more. There are subscription boxes for it. You can also get a variety of packs to try out new flavors.

The bottom line is that K cups are popular.

The Keurig Vue V600 Brewing System gives you total control to customize your cup. Brew stronger, bigger, hotter and with more choices than ever before.

Another bonus of using K cups is that they can be used in many machines.

Any Keurig machine that has a single-serve option (except the Keurig Vue) is compatible with K cups.

Some other brands also allow you to use K cups in their single-serve models.

There is also the option of getting reusable K cups which eliminates waste. If you don’t like K pods then you can get the reusable ones and fill them with your own freshly ground coffee.

So, it’s easier to use K cups compared to Keurig Vue.

There’s also the fact that K cups are easier to use in the machine as well. You just have to pop them in and press a button to brew. It does mean that you can’t personalize your cup each time, but it will take you less time to make coffee every day.

As mentioned above, the answer to the price of the Keurig Vue vs K cup is straightforward. K cups are cheaper than Vue pods.

First, they are compatible with many machines. So, if your Keurig breaks down one day, you won’t have to throw away the K cups. You could give them to someone who owns a Keurig or get yourself a new one and use K cups in it.

Then, the sheer popularity of K cups means that they are available in variety packs or subscription boxes. This not only makes them more accessible but cheaper compared to other options.

The area where K cups lack is the brewing size. Where one Keurig Vue can brew an 18oz cup, one K cup will only brew a 12oz cup.

But, you could tinker with the ratios to get that perfect cup to your liking.

Despite all the benefits of the K cups, you do lose most of the customizability that the Kuerig Vue offers. Most Keurig machines still don’t have as many options as there were on the Vue. And the brewing strength of K cups will be weaker than Vue cups.

Here are answers to some of the most frequently asked questions about Keurig Vue vs K cup.

Yes, Keurig discontinued Vue cups in 2014, only two years after they were introduced.

You can still get them from Amazon but they are hard to come by and are expensive. Also, there are only limited options to choose from.

So, your best option would be to use a K2V cup which is mentioned below in detail.

Can you use K-cups in a Keurig Vue machine?

If you have a Keurig Vue machine but can’t find Vue cups, you can use an alternative.

Sadly, you can’t use K cups in your Keurig Vue.

But you can get a K2V adapter that allows you to brew freshly ground coffee in your Keurig Vue.

If you still really want to use K cups, you can open them up and use the grounds in the K2V adapter to brew them as ground coffee.

Even though Vue was discontinued quite early on, it paved the way for better Keurig single-serve technology.

The latest one is the Keurig 2.0 brewing system which used K cups. It also allows you to choose the brewing temperature and size.

This system will scan the labels of the K cup inserted and will allow adjustments accordingly.

Can you use K-Cups if you don’t have a Keurig?

Probably, yes. Many machines allow you to use K cups if they are pod-compatible.

Other than that, you can open up the K cups and use them as regular coffee. You can use them to make pour-over or drip coffee.

Which One Should You Opt For – Keurig Vue vs K Cup

The verdict is clear. After a decade of Vue being discontinued, you should go for K cups.

If you really value the customization that Keurig Vue offers, you may consider it. But, there are newer machines in the market that offer fancier features. They can be a little more expensive but in the long run, will cost the same since they are K-cup compatible.

For everything else, K cups are better. They are easy to find, easy to use, and less heavy on the pocket.

Now that you know which pods to get, you can check out our article on the best single-serve coffee makers.

I was recently asked, “What is specialty coffee?” which made me think that most like many others might be wondering the same thing. Therefore, I wrote this article. Hope it answers your questions! In this article, I will explain how specialty coffee is grown, how it is picked, where it comes from, and how it’s…

How To Perfect Your Tamping? A Helpful Guide My “Sage Barista Express” was waiting in the kitchen ready for use and preheated. My caffeine level has already reached critically low levels, and I decide to treat myself to an espresso. As always, I grind the beans, spread the coffee in the sieve with my little… 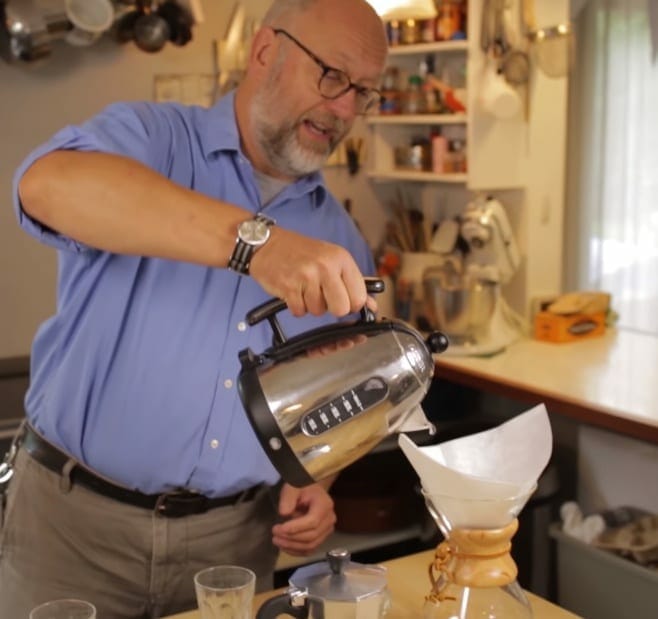 How to make great coffee at home? There are probably many who would think that their very own sophisticated coffee brewing technique is the one that produces the best result. Occasionally, however, it may be fun to try something new and taste something new. If you would like to try your hand at a coffee… 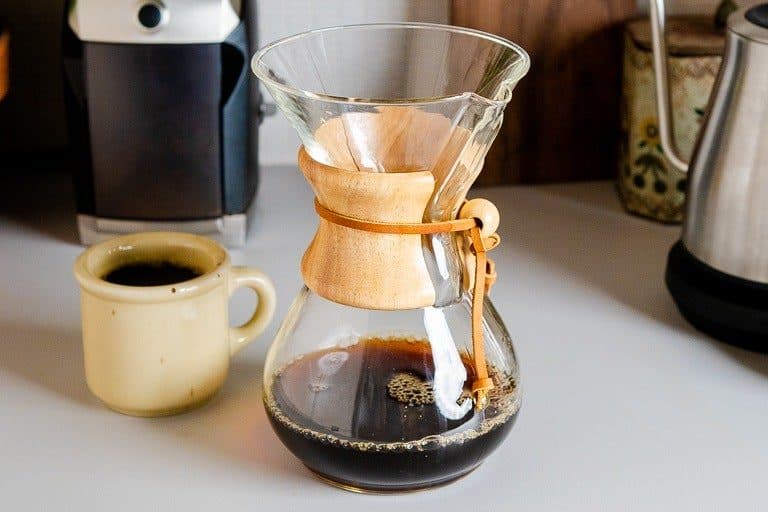 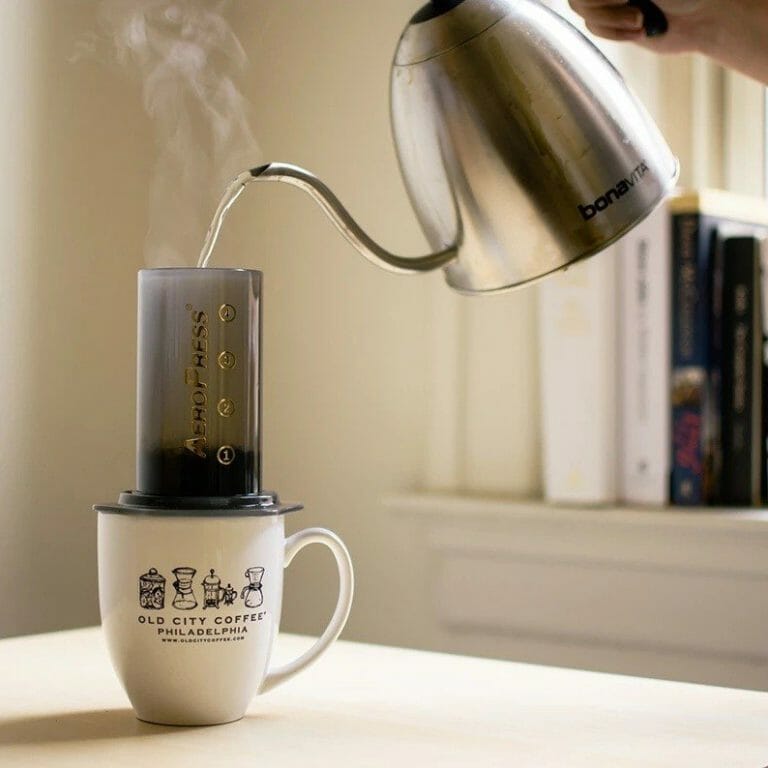 The Ultimate Guide To The AeroPress! AeroPress Coffee Maker – Simple, fast, good! I have had the pleasure of introducing you to a new product that I have purchased on Amazon.  The fact that it is an American product shows from the moment you stand with the box in your hands. A stars and stripes with… 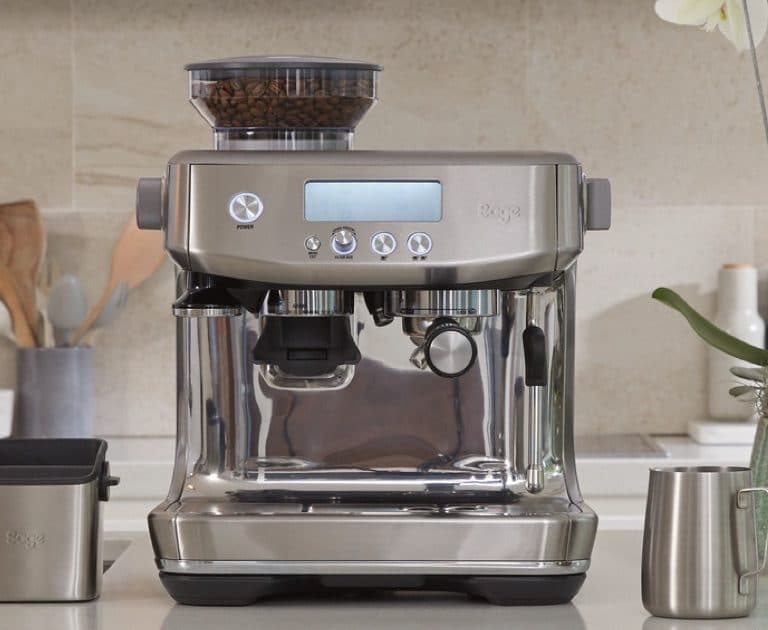 Do you love coffee? Do you love the perfect flavor and intensity you get every time you order a cup of coffee at a café? And do you dream of being able to make just as delicious coffee in your own home? But do you need a guide to which espresso machine will be best…