Coffee is a drink that is so much a part of our culture that we hardly think about it. We drink coffee for breakfast, at work or at home. And it can be prepared in a coffee machine, like a quick instant coffee or in an advanced espresso machine.

Coffee around the world also plays a big role, but the coffee culture can take many forms. 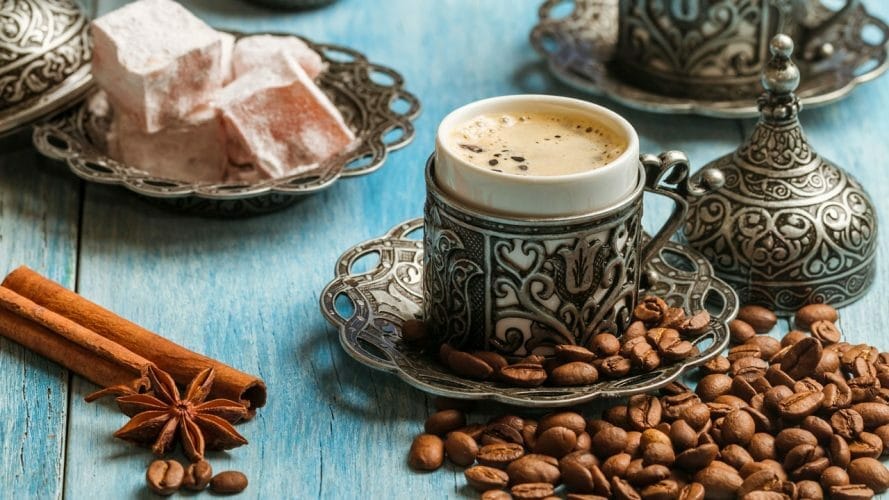 Most people know the Italian coffee culture, with the espressos, cappuccinos and caffeine laughter. It’s easy to get confused about all the ways you can serve an espresso.

The confusion does not lessen if you go to Spain.

Here you can order a café solo if you are in the mood for an espresso and a café double if a double is needed. However, maybe coffee con leche, a coffee with milk, is the national drink. It gets drunk in the morning, in the evening, yes, it also ends most meals. Coffee is an important part of Spanish culture and much of the social life in the cities takes place in the cafes. Each region has its own rituals. Malaga offers the highest number of cafes per square meter in the world, and if you travel to Mallorca you will find that they have their very own coffee accessory, Ensaïmada, which is a kind of croissant with icing.

In Spain, the coffee is usually very strong. A “café” – a cup of coffee – resembles espresso, but of course there are variations.

The name and amount varies according to the ratio of coffee to milk. The starting point is the strong coffee and sugar is always served on the side.

Here in Europe we each have our coffee rituals and ways to prepare the dark drink.

But in one of the countries where they actually make coffee beans.

Ethiopia, in addition to exporting coffee to the whole world, they also have a rich coffee culture.

However, preparing a cup of coffee can be a somewhat time-consuming process, a ceremony held, for example, in honor of guests. The green coffee beans are roasted in a flat bottomed pan over hot charcoal for a few minutes until the oils begin to pull out of the beans but without being roasted. The beans are put in a mortar and painted by hand, after which they are placed in a jabena, a pitcher made of black clay.

Once cooked, the coffee is poured into another container and allowed to cool, then it is poured back and heated. Eventually the coffee is drunk by small cups, either black or with a little sugar, herbs or salt. A little more advanced than the morning coffee from the machine!

The origin of Coffea Arabica is found in Ethiopia, and not in Brazil as many believe. Ethiopians are real coffee connoisseurs.

Buna, or Ethiopian coffee as the rest of us know it by,originates in the Harar region, where the people of Oromo, Harari, Amhara and Somali live.
The coffee is boiled in the household according to a ritual with the help of jebena and then flavored with black cardamom capsules.
In other areas of the country, other spices, such as ginger in the Kaffa region, or cinnamon along the border with Sudan are used.
Some Muslim communities in the Kaffa region prefer to salt rather than sweeten their coffee or dissolve a teaspoon of butter in the cup.

In Turkey, they also have a famous way to brew coffee.

Here you put very finely ground coffee directly in water that is just at the boiling point without boiling. And if you want sugar in the coffee, it must be added during cooking, not after. Turkish coffee is also found in large parts of Eastern Europe, for example in Bosnia, where a similar way of making coffee goes by the name of Bosnian coffee. In the Czech Republic and Slovakia too, coffee is often encountered by cook men. The coffee becomes dense and strong, but you can of course risk a little grumble in the cup when you pour, which you are not used to if you tend to drink coffee that has run through a filter.

On the other hand, it is said that the cloud can be used for divination. So next time you get annoyed with coffee grounds at the bottom of the cup, don’t worry.

Your future may be hiding in the pattern.